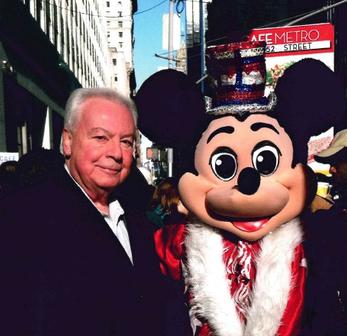 "The noblest art is that of making others happy."
- P.T. Barnum

​ Michael A. Jenkins is President of Leisure and Recreation Concepts, Inc. (LARC), a design and consulting firm for the entertainment industry that includes theme parks, water parks, special event productions, and a variety of other attractions. Jenkins founded this unique company over 46 years ago. In that time LARC has worked on more than 1,100 projects  including the Newport Aquarium in Newport, Kentucky; Messila Water Village in Messila Beach, Kuwait; Yale University’s Tercentennial (300-year) Celebration, which was up-linked on satellite and broadcast around the globe; and the ICR Discovery Center for Science and Earth History, which opened on Labor Day 2019.

In establishing LARC, Jenkins recognized the need for a single firm that could conceptualize, evaluate, plan, build and operate an identified concept within the entertainment and tourism industries. While there were other companies performing some of these functions, none offered a total package that could deliver a financially feasible, aesthetically pleasing and highly functional facility to a developer or owner. In doing this, he has consciously developed a staff having the appropriate technical knowledge and experience to provide clients with the highest quality service. LARC's research department studies trends in the leisure, recreation, entertainment and theatre industries, in addition to planning, design, and management; LARC also maintains one of the largest amusement and entertainment libraries.

Michael has over 56 years of experience in the Leisure Industry. He worked as a former Vice President of Six Flags Over Texas, has been involved in more than 250 Broadway musicals, the planning and design of numerous theme parks, water parks, family entertainment centers, convention/conference centers, location-based entertainment centers, multi-use centers, resorts, natural attractions, cultural and heritage attractions, themed retail and restaurants, zoos and museums. Michael has dedicated his life to creating entertainment for the whole family.

The theatre has always been Michael's first love, starting as an usher at the age of 14 working under his mentor, Charles R. Meeker, Jr., at the Music Hall at Fair Park in Dallas, Texas. Michael's philosophy is that “show business” is about being creative and putting on the show, but also running the show as a “business." Michael is the founder and CEO of Starlight Entertainment, in which he has produced over 20 smash-hit shows! To read more about Starlight Entertainment and Michael's many Broadway accomplishments, click here.